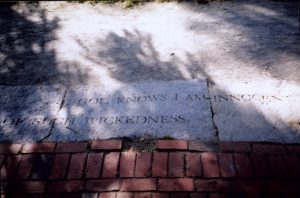 Salem, Massachusetts, 1692. The chilled February air fills the lungs of the Salem townsfolk, a tragedy bubbling like a witch’s brew. An isolated settlement, villagers, locked in darkness. One hears and sees more vividly when there’s nothing else to do; imaginations ran wild.  There’s a reckoning happening, the infamous Salem Witch Trials. A few girls in the village claimed to have been possessed by the Devil, complaining of bites and scratches by unseen forces. They would go into convulsions, falling into trances and spouting out names of several local women that the Devil said are practicing witchcraft.

By summer, public hysteria is running rampant, and the Puritan town is demanding justice. Women were being accused left and right as being witches for ridiculous reasons. If someone in town disliked you, you’re a witch. Were you out late one night? You’re a witch. Do you float in water? Witch. You don’t float? You guessed it. You’re a witch. Children pretending to be animals, as children do, were accused of witchcraft. Even a simple mistake in the reciting of the Lord’s Prayer would have you hanged.

In 1641 when the Puritan colonists were establishing a legal code, the accusation of witchcraft was only second to idolatry (the worship of something or someone other than God.) The accusations were taken very seriously, as witchcraft was one of their top three crimes, their top three sins. Nineteen women and girls were hanged at Procter’s Ledge after being accused. The youngest was just five years old; the eldest was nearly 80. Even two dogs were executed based on the suspicions of their involvement in witchcraft.

After plenty of years of debate, historians agree that this patch of forest was the site of the hangings during the Salem Witch Trials. The ledge bore witness to its fair share of unnecessary and brutal suffering. Nineteen accused ‘witches’ were hanged here, their bodies discarded in a rocky crevice nearby. This site wasn’t identified until January of 2016, however, due to an error in calculations. Gallows Hill was thought to be the site of the hangings until then. Located between Procter and Pope Streets, the ledge is quiet; some would even say peaceful. It’s in a residential area, overlooking a drugstore. Does it really carry the weight of the horrors that happened in 1692 Salem? Using eyewitness accounts, historical records, and trial papers, Procter’s Ledge was finally pinpointed in 2016 as the true site of the hangings. So, now that we know where these villagers were executed are we able to communicate with the dead to finally give them the closure they need to move on?

A Bit of History…

Way back in 1692, a small village called Essex County was the hometown for America’s most lethal of witch hunts. Over 200 women, girls, and men were accused, and 19 of them were executed here. Some of the executed included women such as Sarah Good, Rebecca Nurse, Sarah Wildes, and Susannah Martin. Their executions were brought about by nothing else but eyewitness accounts, and no evidence was ever presented. Witchcraft was an easy charge. Paranoia and prejudice ran rampant in the village. Neighbors turned against one another, people lied under oath, testimonies were being fabricated. People were being hanged without a fair trial, and once they were dead, they weren’t given a proper burial. They were just cast away like garbage into ‘the crevice.’ It would be no surprise to find that all nineteen accused witch’s spirits are still here, so unfairly treated in life. As if the hangings themselves weren’t terrible on their own, one can only imagine the way that their neighbors treated these people in their final moments – pure malice, anger, and accusation. In their hearts, they knew they were innocent but knew they were doomed once they heard that gavel slam, their fates sealed, their lives stolen.

A Name to Carry Through History

It is thought that Procter’s Ledge is named after John Procter, who ended up as one of the accused in Essex County. John Procter had been hanged at the ledge in August of 1692. He once publicly stated that he doubted the validity of witchcraft, and he even stated that any Devil in Salem was with the accusers, not the accused.

Procter was not convicted of witchcraft until after a string of his family members, including Rebecca Nurse and his third wife Elizabeth were tried. Without evidence, Procter’s former servant accused him of dealings with the Devil. She stated that he forced her to ‘touch the Devil’s Book’ and assaulted her for putting up religious scripture in the home. Even with 32 of John Procter’s neighbors stating that the accusations were wrong, the court found Procter guilty of witchcraft and executed him.

With such nightmarish history, Procter’s Ledge must be oozing with spectral energy. Local legend tells of a Lady in White that is seen wandering the ledge. Visitors claim to have seen her apparition, and others only state they heard her disembodied screams. Cold spots and incandescent orbs are also reported here and in the crevice where the wrongly executed were laid to unrest.

Some visitors to the ledge swear they hear the sounds of cracking, ropes stretching… do they hear residual sounds of the hangings that occurred at Procter’s Ledge? Are the spirits of the dead trapped here regardless of if their bones remain? In the paranormal community, tragic deaths leave imprints and can cause spirits to become trapped in the location where they died, regardless of if their remains have been buried elsewhere.

There is evidence of remains being left in the crevice, covered only with a few feet of soil. Back then, it was illegal to touch or transport bodies of accused witches. However, families of the dead would want a “Christian burial,” the relocation imperative to the safeguarding of their eternal souls. In August, however, it was considered too hot to wait to bury, and that the five people executed on August 19th would have been buried right into the crevice, seeing as though they needed to be below ground as soon as possible to avoid rapid decay and putrefaction.

Finally, in July of 2017, on the 325th anniversary of the hangings, a memorial was designed and dedicated to those who were hung at Procter’s Ledge. A semi-circular stone wall stands with names and execution dates of all nineteen victims engraved in granite for years to come. There are also stone benches where locals leave flowers and offerings. The stonework near the memorial entrance is inscribed with historically correct pleas of innocence that are symbolically interrupted mid-sentence by the wall itself to show the indifference to the suffering that existed during the time. We can only hope that this memorial offers these wayward spirits closure of their passing and that some sort of justice has been served for them.

Events like the Salem Witch Trials really go to show how horrific humans can be to one another with the right amount of brainwashing and mass hysteria. Unfortunately, we are still seeing this type of injustice today in many countries across the globe. Preconceived notions run rampant, and if we’re not careful, they can lead to unjustified accusations and even murders. As for Salem, it is a town truly changed by these occurrences. Hauntings around Salem are common, the town itself is one of the most haunted on the map. Tourists and ghost hunters alike swarm here to glimpse the ghouls that call Salem home. For more on Salem’s most haunted locations, check out another of our blog posts here!