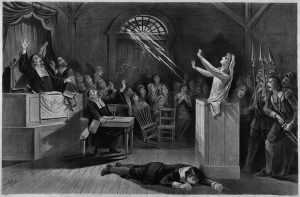 When most people think of Salem, Massachusetts, the first thing that comes to their mind is the famous witch trials of the late 1600s. Between 1692 and 1693, more than 200 people were accused of practicing witchcraft in colonial Massachusetts. 19 of the people accused were found guilty and sentenced to death by hanging, while one man was crushed to death as punishment for refusing to plead either guilty or innocent. Several other people died while being held under horrific conditions in prison.

The Salem witch trials were one of the deadliest examples of mass hysteria in colonial America, and many people believe that the dark forces at play during this era have left a permanent mark on the town of Salem. However, it’s not only witches that lend to Salem’s reputation as a place of supernatural power… Check out the top ten most haunted places in Salem!

Now a popular restaurant, In a Pig’s Eye was once located in the heart of Salem’s seedy underbelly. Many taverns, brothels, and underground tunnels stood in this area of the town, and it’s believed that sea captains docking at the nearby Derby Wharf would kidnap unsuspecting young men from the area and force them into service aboard their ships.

The restaurant is believed to be haunted by the spirits of several sailors who either died at sea or were killed while on shore in Salem, and many people have reported hearing disembodied voices or seeing shadow figures flit through the restaurant.

Like In a Pig’s Eye, Wicked Good Books is located above some of the centuries-old tunnels which crisscross the length of Salem. The owner of the establishment came upon the tunnels while renovating the site, and paranormal investigators discovered desecrated human remains in the hidden tunnels beneath the shop.

It’s been reported that books often fly off the shelves of their own accord, and many patrons of the shop have seen shadow figures and apparitions hovering in the corners. The store has found the silver lining in the hauntings, though, and has made a name for itself as Salem’s Haunted Bookstore.

Built in 1923, the Hawthorne Hotel is one of the (comparatively) newer haunts in Salem. It’s believed that the hotel is built on the site of an apple orchard that was owned by Bridget Bishop, the first victim of the witch trials. Guests have often reported smelling apples around the hotel as well as seeing an apparition of a woman roaming the halls.

Room 612 is believed to be the most haunted room in the hotel, and many guests have reported seeing the figure of a woman standing outside the door. Room 325 is also considered to be one of the hotel’s paranormal hotspots, with reports of faucets turning on by themselves, lights flickering, and the sound of a baby crying being heard. Employees and guests of the hotel believe Bridget Bishop is source of these paranormal encounters.

The Salem Lyceum was established in 1830 as one of many similar institutions in the country designed to deliver lectures, debates, and seminars to the public. The Lyceum is now known as Turner’s Seafood, but for many decades the site played host to dozens of famous speakers and intellectuals, including Ralph Waldo Emerson, John Quincy Adams, and Frederick Douglass. Alexander Graham Bell even first demonstrated the use of the telephone at the Salem Lyceum in 1877.

Many believe the Lyceum is haunted by the spirit of Bridget Bishop, while others think the apparition is that of another “witch” who was hanged during the trials. Poltergeist activity has been reported in the building, and employees have witnessed boxes being thrown, objects flying off shelves, and having the feeling of being pushed or touched by an unseen entity.

The historic Salem jail housed prisoners for almost 200 years, operating from its construction in 1813 until its abandonment in 1991. The old building stood vacant for several decades before plans were made for it to be renovated and converted into apartments, a restaurant space, and an exhibit on the jail’s history.

Although the Salem jail was created long after the witch trials, it’s said that the structure was built on the same site as the dungeon where “witches” were once held. The old Salem jailhouse held prisoners in appalling conditions, with dirt floors, lice-ridden bedding, and freezing winter conditions. Many prisoners died from illness or injuries sustained while in detention. Though the Salem jail of today houses residents of a different kind, it’s certain the negative energies accumulated over the centuries have contributed to the rumors of apparitions, cold spots, and poltergeist activity in the building.

Because of the difficulty of interpreting historical texts and records, there has been some contention as to the exact location of the infamous hangings of the Salem witch trials. However, thanks to the efforts of a local historical society, the true location of the gallows has been determined to be Proctor’s Ledge, a small hill between Proctor Street and Pope Street in Salem.

Proctor’s Ledge was not only the site of many horrific executions but also served as the unceremonious dumping grounds of many “witches’” bodies. Many of the accused had their corpses thrown in a crevice near the gallows rather than being properly buried because, as one report claimed, “to touch a witch corpse was malignant.” Witches or not, Proctor’s Ledge has an undoubtedly dark energy from the injustice and atrocities committed there centuries ago.

The inspiration for Nathaniel Hawthorne’s famous novel The House of the Seven Gables, the Turner-Ingersoll Mansion—or, the Turner House—is one of the oldest and most famous homes in New England. The original structure was built in 1668 by sea captain John Turner, and through the years the house was expanded and added onto until it became the stately, seven-gabled mansion Hawthorne immortalized.

Captain Turner died at sea not long after building the home, which was a common fate for many sea-faring Salem men at the time. However, the Turner family seemed to be cursed with misfortune, and the mansion stood witness to several more family deaths over the years. Perhaps this grim history explains why the mansion is believed to be so haunted. Visitors to the home have reported witnessing several apparitions, including a little boy in the attic and a woman thought to be a member of the Ingersoll family, who took ownership of the house after it passed out of the Turners’ hands.

Perhaps Hawthorne’s description of the house best explains its strange and fascinating aura: “It was itself like a great human heart, with a life of its own, and full of rich and sombre reminiscences…. You could not pass it without the idea that it had secrets to keep.”

As with any cemetery, the Old Burying Point Cemetery is said to be home to many different spirits. Established in 1637, it’s the oldest cemetery in Salem as well as one of the oldest in the country. Many important city figures are buried here, but perhaps most auspicious is Judge John Hathorne, the “Hanging Judge.” Hathorne presided over many of the witch trials and was known to be a cruel, unforgiving judge who sent most of his cases to the gallows—guilty or not.

It’s said the spirit of Hathorne often makes appearances in the Old Burying Point Cemetery, and many visitors to the site have captured a shadowy figure on camera near the Judge’s 300 year-old grave. As author Nathaniel Hawthorne, the great-great grandson of Hathorne, said of the Hanging Judge, “[he] made himself so conspicuous in the martyrdom of witches, that their blood may fairly be said to have left a stain on him.”

Also known as the Corwin House, this structure is the only remaining building in Salem with direct ties to the witch trials. The house originally belonged to Judge Jonathan Corwin, a judge who served on the court which sentenced 19 people to death by hanging for witchcraft.

The house has stood for almost 400 years—a feat in and of itself—and is now open to the public as a museum. Many people believe that because of Corwin’s involvement with the witch trials, the home is haunted by the spirits of the people he sentenced to death. Others claim Corwin himself haunts the home in addition to four of his children who died early in life within the house. Visitors to the site have captured strange figures on film as well as reporting cold spots and strange presences.=

This stately manor is thought to be the most haunted home in Salem. The house was built on the footprint of the home owned by George Corwin, a malicious sheriff who tortured victims of the Witch Trials and who is thought to still haunt the site.

Among Corwin’s more horrific deeds was the supervision of the “pressing” of Giles Corey, an 81 year-old man who was accused of witchcraft. After refusing to plead either guilty or innocent in court, Corey was punished by being laid on his back and having heavier and heavier weights piled onto a plank across his body. The old man suffocated as his ribcage and organs were slowly compressed, and some legends claim that with his final breath he cursed Corwin and the town of Salem.

Though the Joshua Ward house is thoroughly entrenched in legend and superstition, many believe that Giles Corey’s curse condemned Sheriff Corwin’s spirit to wander the earth for eternity, and in the basement of the home many visitors have experienced feeling choked by an unseen force.

“Something wicked this way comes…”

There’s no doubt that Salem has been irrevocably marked by the Witch Trials which took place more than 300 years ago. The town is still home to so many of the structures and sites which stood witness of the atrocities of the 1690s that many believe Salem is one of the most haunted places in the United States. Whether you’re in town to enjoy the sights of New England or searching for something a little more sinister, be sure to check out some of these historic and haunted places in Salem.

In a Pig’s Eye: https://www.hauntedrooms.com/top-10-haunted-places-salem-ma