The Top 10 Most Haunted Places in Salem 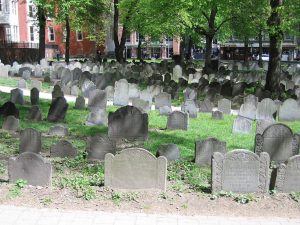 Historic Salem Village, Massachusetts, now known as Danvers, is located in Essex County; its tales of terror have long been told throughout cinematic history. Salem was home to the infamous Salem Witch Trials that took place from February 1692 to May of 1693. More than 200 people were accused of witchcraft, with 30 of them being found guilty. Nineteen people were executed by hanging (five men and 14 women), along with five people dying in jail. One man by the name of Giles Corey was executed by being crushed to death for simply refusing to make a plea.

What ultimately turned out to be nothing more than mass hysteria, the Salem Witch Trials serve as a cautionary tale in regards to the extremes society tends to take when dealing with matters of which they don’t fully understand – or outright fear. The New World’s now-absurd practice of executing witches was already subsiding rapidly across Europe.

Read on to take a closer look at the stigma still surrounding Danvers, Massachusetts, the modern-day Salem Village. Here you’ll find the top 10 places associated with the horrors from its past.

10. House of the Seven Gables 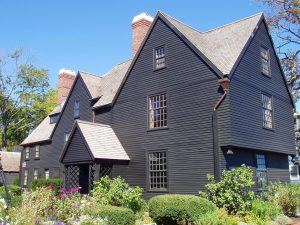 Made famous by American author Nathaniel Hawthorne in 1851 from his novel of the same name, the home was built for Captain John Turner in 1668, and remained in his family for three generations. Facing south towards Salem Harbor, it was originally only a two-room, two-and-a-half story house, with a huge, central chimney projecting out of the front porch. A few years later, however, a kitchen was added near the back, followed by yet another add-on in 1676.

It’s certainly subjective association. You see, one of the first three women accused and hanged in the Salem Witch Trials was Sarah Good. At her hanging, she reportedly placed a curse on the presiding Reverend Nicholas Noyes, who later died of an aneurysm. And remember author Nathaniel Hawthorne mentioned above? Sarah was sentenced to death by his grandfather, Judge John Hawthorne. He was rather hateful toward all involved, and he never recanted for the executions that he was responsible for in the trials (even though all of the accused were later vindicated of any wrongdoing). 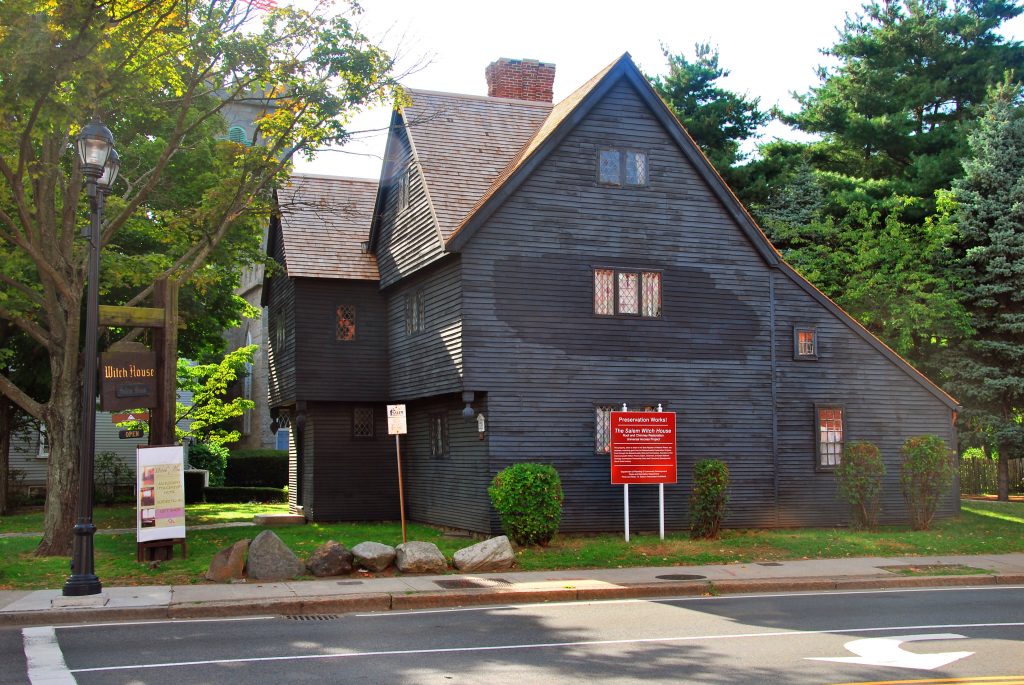 Properly known as the Jonathan Corwin House, this home was built somewhere between 1620 and1642. In the 1940s, it was moved approximately 35 feet to accommodate widening of the streets. It now operates as a museum of Salem’s history, and was even featured on the television series Ghost Adventures in 2011.

The house is named after its owner, Jonathan Corwin, who just happens to be one of the Witch Trial judges. He investigated much of the claims associated with the alleged witchcraft activity. He signed several arrest warrants, but due to an inadequacy in records, it’s difficulty to surmise his role completely. He died in 1718. 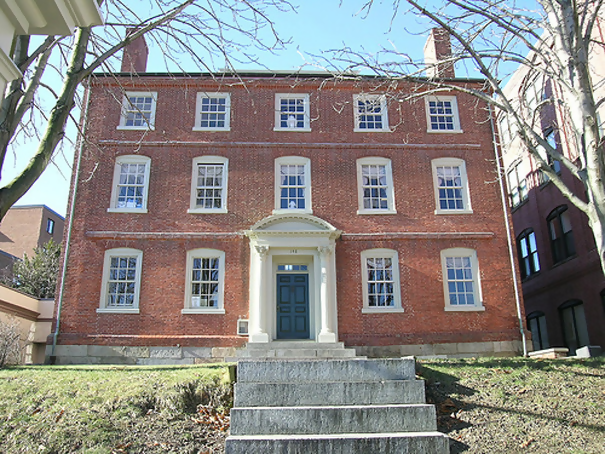 The third house on our list takes a much more sinister turn. It was home to many who were accused of witchcraft, and Sheriff George Corwin, who was well-known as The Strangler, frequented here to accost such people, notably the aforementioned Giles Corey. Interestingly, Sheriff Corwin died from a heart attack in this very building in 1696.

Both the ghosts of Giles and Corwin are said to haunt the building to this day. Another apparition that appears to be female is also said to have been seen here. If they are to be believed, multiple witnesses have suffered scratches and burns on their extremities, with some even claiming that they have been strangled – just like Sheriff Corwin used to do to his victims. 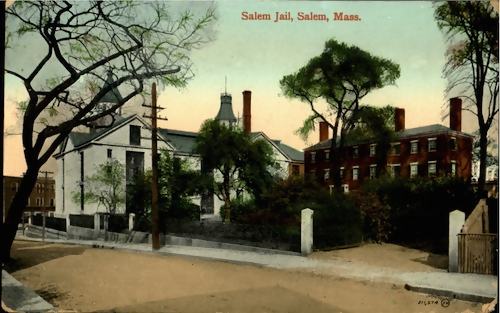 The Salem Jail was built in 1684 and later renovated and remodeled into a house. It was initially built mostly out of wood, but was replaced altogether with a newer stone jail in 1783. Timber from the old jail was used in the construction of the updated site, with the former being opened as a tourist attraction.

Over the course of nearly two centuries in operation, many prisoners bit the proverbial dust due to the jail’s abysmal conditions alone. And it is said that the jailhouse was built over an old dungeon that once held witches and the like. Many rumors persist that apparitions have long been encountered within the jail’s walls, such as a wandering guard carrying a clipboard. 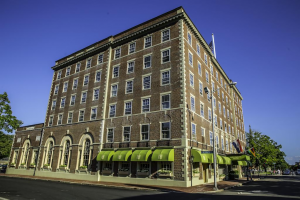 Author Nathaniel Hawthorne is once again referenced here, this time from a hotel named after him. Salem’s Chamber of Commerce and Rotary Club are responsible for this joint venture. Built in 1925, the hotel also features a statue of its namesake just a few yards away. Such is its grandeur that many famous people have stayed here, including Johnny Cash, Liza Minnelli, Bette Davis, former president George Bush, and the cast from the 1970s sitcom “Bewitched”, which also featured the hotel in one of its episodes.

Bridget Bishop, the first woman executed during the trials for the practice of witchcraft, was said to have owned an apple orchard upon which this hotel was later built. Many witnesses maintain that they have encountered her very spirit within the hotel, specifically on the sixth floor, around rooms 325 and 612. Furthermore, guests have reported experiencing odd sensations near these rooms, as well as hearing actual ghostly voices. To round out the weirdness, folks have detected the unexplained smell of apples. 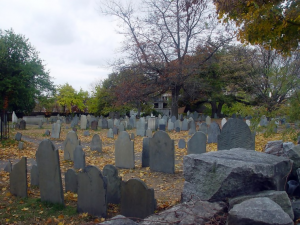 Laid out in 1637, not only is it the oldest cemetery in Salem, but the United States, too. The dastardly Judge John Hawthorne is even buried here, who, if you recall, is responsible for the hanging of many of the accused witches and warlocks.

You Be the Judge

Given his cruelty toward those he had hanged, it’s no wonder that many visitors of the Old Burying Point Cemetery claim to have captured his ghost in photographs taken of his grave. Let’s face it; this guy had positively no remorse for the innocent folks he accused of witchcraft, which even included a 4-year-old girl. If anyone is cursed to wander aimlessly around their burial site, it’s Judge Hawthorne.

Although it’s now closed, Murphy’s was located just down the road from the Old Burying Point Cemetery. Having served a wide variety of drinks, visitors didn’t just drink spirits; many claimed to have seen them, as well.

Murphy’s has had quite the history of paranormal sightings. It all stemmed from an awful automobile accident many years ago when the casket of a young child was said to have crashed through the building’s exterior. Rumor also suggests that its foundations are built upon another old burial site. Witnesses at the pub’s bar have also reported the apparition of a young lady wearing blue.

For many years, poor record-keeping has caused many to argue the exact location of the Salem Witch Trial hangings. What records were available were deemed too difficult to properly interpret.

Thankfully, through the diligent research of Salem’s local historical society, it’s now safe to say that Proctor’s Ledge served as the execution site for many of the accused. The accursed grounds are located just between the streets of Pope and Proctor.

Sadly, hangings weren’t the only atrocities to take place here. Many of the corpses never got a proper burial; they were dumped around the surrounding area, as it was considered dangerous to touch the body of a witch. 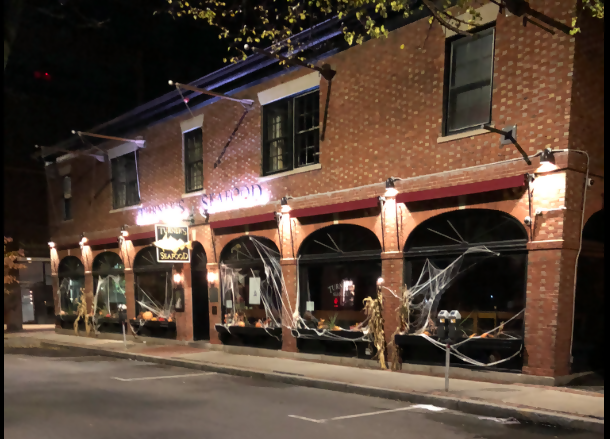 Interestingly, Lyceum Hall is where Alexander Graham Bell made the world’s first long-distance phone call. Now known as Turner’s Seafood, Lyceum Hall was built in 1830 and was used to house lectures and seminars. Not only did Bell grace its hallowed walls, but John Quincy Adams and Ralph Waldo Emerson spoke here.

Who You Gonna Call?

Bridget Bishop again, apparently. She is once again the ghost of choice here, as many visitors have claimed to have seen her haunting the structure. Others argue it is a different spirit altogether, albeit one of the witches that were hanged at the trials. Even employees have witnessed the sight of poltergeists throwing stock off of shelves, while others claimed to have been touched or even shoved, by invisible forces.

Although The First Church of Salem is now inhabited by Rockafellas Restaurant, fine dining was the last thing one would expect to find here. Built over ancient tunnels that were common in Salem’s darker days, sordid stories of love and murder make up this landmark’s history.

A Sea of Despair

History tells of a young maiden named Sarah who was loved by an older sea captain. This love, however, was unrequited, as Sarah’s heart beat for a young sailor whom she planned to run away with when the captain left for sea. Furious with Sarah upon learning of her plans, the elder captain allegedly struck her with a plank, killing her in the alleyway alongside the First Church.

Distraught, the captain employed the help of the church’s minister to assist in Sarah’s burial within the underground tunnels. The minister later committed suicide over his actions. The sightings of Sarah referred to as “the Blue Lady”, as well as the minister, have been reported within Rockafellas’ walls. So often is Sarah said to be seen that the restaurant even named a drink after her.