The Salem Witch Trial: A blow by blow 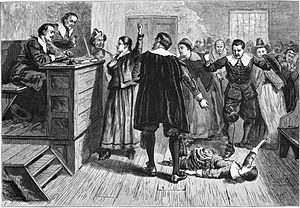 The BIG selling point in that great machinery that is known as Tourism in Salem is WITCHES; it’s basically the hot ticket item and the first thing most people think of when the word Salem is uttered. The town is dipped in witchcraft and witchery, and in ways to waggle the suspecting tourists into their personal brand of magic… one sparked by capitalism, funky store window dressing, and the need to highlight a distinctive part of their regional history.

You have thousands of stores with supernatural related nomenclature, hundreds of tours focusing on the gorier aspects of the area’s past, and so many statues and plaques underscoring the madness that happened in the late 17th century that you can’t swing a cat without hitting one… A black cat so we can stay fastened to the thematic theme.

In Salem, it’s all about the witches… Or more to the point the famous Witch Trials. But few visitors actually know what they were. Few are read up on what took place in Salem and why it was, to put it bluntly, such a big deal.

Salem is a cobblestone marvel paved in history and tragedy. It is a place dammed by humanity’s lesser demons and a blight on a fledgling nation’s reputation. Salem’s history is a pox on everything we as Americans hold dear. Salem and what happened back in those post pilgrim days were the birth pains of a nation starting to get its act together… birth pains that left scars. Whenever we as a tribe want to make a statement on persecution, on women’s rights, on the abuse of zealots, or on the haste of corrupted officials we get up and screech to the four winds:

“What is this a witch trial? Are we in Salem!”

Salem has been employed in political rhetoric and popular literature as a strong cautionary tale about the perils of isolationism, religious extremism, false allegations, and lapses in due process.

The Salem witch trials were a string of hearings and prosecutions of people arrested, indicted, and abused on the charge of witchcraft and consorting with the Devil. They were medieval pig circus-like affairs – right out of a Monty Python skid but without the laugh track – that occurred in colonial Massachusetts between February 1692 and May 1693. During that year the folks in that area lost their senses and went bananas. Worldwide it is considered as one of the most appalling cases of mass hysteria.

More than two hundred people were accused; in a small colony that was a record number. Everyone was being painted by their neighbors as cohorts of Old Scratch. Thirty were eventually found guilty, nineteen of whom were executed by hanging. And, it wasn’t just Salem but towns beyond. The whole area was caught up in witch hanging frenzy; paranoia and ill-intent swept like wildfire throughout the land. Andover and Topsfield, close to Salem, were ransacked by Puritan Inquisitors and their woman and men hauled up to a grand jury held at Salem. It was the most violent witch hunt in the story of colonial North America

“The Salem witchcraft was the rock on which the theocracy shattered.”

Most of the victims of the trials have since been exonerated by the USA.

The Backdrop of Madness

Witch trials had started to disappear across much of Europe by the mid-17th century, they were superstitious travesties that only served to promote corrupted officials and allow fringe government groups control over small hamlets. The Monarchies, partly influenced by the advance of science and a social outcry for civility by their people, started to crack down on them.

Nonetheless, they continued to prosper on the edges of Europe – witch trials transforming into vampire hunts or werewolves scare; local leaders finding loopholes to subjugate their civilian population.

“For a time, since witches were considered a taboo subject and frowned upon by the Crown the regional theocracies began to dust-off pagan folklores and traditions and paint them under a new sheen of Christianhood. Strigoi’s became Vampires and so forth.”

The events at Salem became a small outbreak of a sort of madness in the New World imported from a practice that was already waning in most of Europe. In a way, the Salem Witch Trials were partly responsible for the whole odious tradition to finally go the way of the dodo.

“The denial of the bodily resurrection and the supernatural spirits is the denial of God. Ingenious men should believe in witches and apparitions; if they doubted the reality of spirits, they not only denied demons but also the almighty God.”

Joseph’s treaties along with those of his cronies/peers in 1668 were at fault for what took place in Salem. Anyone who disbelieved in demons and witches also disbelieved in the existence of angels. To deny such apparitions was to deny God. In Joseph’s mind and the framework, he publicized, to refuse that “demons were alive.” was an act of heresy.

Gender relationships also played a key role in the whole affair. A remarkable bulk of the folks accused and condemned of witchcraft were women (about 78%). The Puritans were firm believers that women were inherently sinful and more susceptive to damnation than men.

And finally, there was the fact that a good witch trial allowed local officials to seize land and fortunes. Arguments about property lines, grazing rights, and church privileges were settled in many cases by condemning the “quarrelsome” party to exile or the noose.

How it all begun

From June 2 to May 11 the trials are conducted. The first to be formally indicted, tried and hanged – in less than 8 days – is Bridget Bishops. She’s dragged up to Gallows Hill – a haunted milestone in Salem nowadays – and sentenced to death.

From there on folks are either found guilty or die horribly in prison; Gallows Hill becomes a very frequented area. In the span of a month – June 2 to July 2 – 7 Salem citizens were found guilty and send to the noose. On July 19th, Sarah Good, Susannah Martin, Rebecca Nurse, Elizabeth Howe, and Sarah Wildes are executed by hanging at Gallows Hill in Salem.

Only women who are with child or willing to attend to the prosecutors’ “desires” are spared from the gallow. Jailbreaks become common themes in the newspaper.

September 19 one of the most insidious acts of the Salem Witch trials take place, Giles Corey is pressed to death for protesting to agree to be tried by a jury of scoundrels.

“.. remanded to the prison from whence he came and put into a low dark chamber, and there be laid on his back on the bare floor, naked, unless when decency forbids; that there be placed upon his body as great a weight as he could bear and more, that he hath no sustenance, save only on the first day, three morsels of the worst bread, and the second day three draughts of standing water, that should be alternately his daily diet till he died, or, till he answered.”

According to the law, a person who refused to plead could not be tried. To circumvent people cheating the system, the legal remedy was “peine forte et dure“.; a process by which the prisoner was stripped naked, and heavy boards were laid on their bodies. Then rocks or stones were set on the plank of wood; slowly crushing the person until they pleaded or went squish

October 3: The Rev. Increase Mather, President of Harvard College and father of Cotton Mather, denounces the use of spectral evidence. Spectral evidence is what the prosecution likes to call “spiritual signs of witchcraft”… In other words the lack of actual evidence.

Also, in October, the Governor of the region – disgusted by what he has witnessed – wrote to the Privy Council or King William and Queen Mary informing them that he has stopped the barbarous proceedings and urging for their help. The Court of Oyer and Terminer is dissolved and the Governor prohibits further arrested.

The jailhouse is still brimming with folks who were accused and arrested before the Governor’s October proclamation. The trials continue but under a different light. Most people are found not guilty and those that somehow are tried and convicted are later cleared by proclamation.