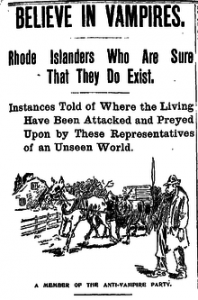 The northern section of what would later be called the 13 Colonies, those fledgling regions taking the brunt of colonialism, puritanism, and all those other isms escaping from UK’s imperialism weren’t exactly a hive of understanding and fraternal love. The founders – the exiles of England – crashed headlong onto Plymouth Rock, in essence rushing out of the known world into a savage land cause of “persecution”. These very founders’ ideals somehow instantly devolved into fervor xenophobia and religious grandstanding.

Pesky Natives? Let’s seize their lands, boggart their crops, and make a general nuisance of ourselves.

Foreigners coming ashore from places other than merry England? Let’s make their lives a living hell, cause we simply can’t be bothered to share.

Milk curdling or a devastating dry season or the church burning down or a bout of seasonal flu? Goblins, elves, and fairy folk running rampant.

Tolerant they were not. In the words of Batman – cause really why not, if vampires are real so is Batman – they were:

“A cowardly and superstitious lot.”

In part, this attitude, aside from the obvious political and social reason which we will not discuss, is the direct result of spiritual traditions and cultural biases brought from the Old Country. The upper regions of Europe are, even to this day, swamped by supernatural fervor. In the States, we are plagued by ghosts, a bigfoot or two, and UFOs, in Britain they are haunted by witches, sprites, vampires, dragons, and Fay/Fae Courts. They don’t fear a disgruntled poltergeist but the ire of a mad Goblin King The latter was though to organize the fairy equivalent of US foreign policy in the Middle East, The Wild Hunt, Scorched Earth, nothing left standing.

To the folks that came on the Mayflower – in spite of their Protestant proclamations – Dracula was real. And the Count was positively regal and courtly compared to some of the things that hunted them on winter evenings. They feared creatures like The Redcap – a murderous goblin from Scotland that would kill unsuspecting travelers on the road at night and then soak his cap in their blood. They wouldn’t go to a lake alone fearing the existence of kelpies – shapeshifting water sprites that might snatch you from the shore and then drown you just for kicks. Dragons? There were dozens. One actually lived nearby the Krakow Castle. Witches had an actual holiday, Walpurgis Night, where they would summon Satan and make pacts and deals.

When the Pilgrims finally reached the New World, they brought along these monsters. There’s a reason why New England is mired in bizarre tales. There’s a reason why the region is the home of Stephen King and why H.P.Lovecraft created his mythology in those latitudes. The Necronomicon doesn’t come from Iran peened by a The Mad Arab Abdul Alhazred, but out of Providence, Rhode Island. The tradition hasn’t gone away, it merely evolved. We no longer talk about a Bogart – a shapeshifting boogeyman that takes the form of your fears – but Pennywise the clown. Long gone are the days of Kelpies, now they’re replaced by Deep Ones. Witches evolved into Satanists. And Vampires… well, they stayed the same… Vampires are just to cool to change; Twilight was a glitch!

This almost biological imperative to blame “things that go bump in the night” for a bit of bad luck has evolved throughout the years. The bias has spawned thousands of cultural goldmines and is partly at fault for our rich blend of mythological creatures. It also carries the burden of some of the strangest historical events in American history. This tendency, bent and bigotry is responsible for the Salem Witch Trials. This flash of preconception and head-set is also responsible for another less known and more modern mental hiccup: The New England Vampire Panic.

“The savage man is never quite eradicated. I have just read of a family in Vermont – who, several of its members having died of consumption, just burned the lungs and heart and liver of the last deceased, in order to prevent any more from having it.”

Up until the late 19th century, consumption was the portmanteau used by the layman for tuberculosis. It was called that because of the weight loss suffered from those afflicted by it. Tuberculosis is a highly infectious disease spawned by the Mycobacterium tuberculosis (MTB) bacteria. It normally affects the lungs and can kill up to 50% of those infected by it. Tuberculosis, as of 2018, affects more than 10 million people worldwide. One-quarter of the population is thought to have latent – not active – TB.

Now, thanks to medical advances, the fatality rate of TB has been reduced from 50% to 15%. In many cases what ultimately kills a TB victim isn’t the disease by the sub-par medical facilities in which they are treated. Most deaths occur in developing countries such as India, China, Indonesia, Pakistan, and the Philippines.

Well, back in the late 19th Century, the WORLD as a whole was a developing country. Consumption was seen by a community as nothing more than the wrath of God.

In the middle of the 1800s, there was a rather nasty TB outbreak in the northern parts of the United States.

The outbreak spread like wildfire across Rhode Island, eastern Connecticut, Vermont, and other parts of New England. People started dropping like flies.

“We have a vampire!”

Yes, mid-19-century, Darwin just around the corner, the Industrial Revolution in high gear, science out-pacing superstition and the New England roomer’s reaction to TB was to blame “a bloodsucking fiend.”

The idea was simple and a bit wacky: the infection was easily spread among family members, as such one of them had to be a vampire. The first one that had died of consumption was thought to arise from the grave at night and drain the life of his loved ones. The belief made the rounds fast and suddenly everyone was on the lookout for a Dracula.

In an attempt to protect the living and ward off the effects of the damned, bodies were exhumed and examined for tell-tell signs of vampirism. If the corpse was unusually fresh then there was no doubt that the medical examiner had uncovered a Nosferatu. The culprit would be decapitated, their mouth stuffed with garlic and placed between their legs, their heart and lungs cut out and burned, and finally for good measure – cause there’s no such thing as overkill when it comes to desecration – their body staked to the coffin.

The affected family, those with TB, would then inhale the smoke from the burned organs and/or consume the ashes in an attempt to cure the odious malady.

Initially, the press dismissed the practiced, they were skeptical of it even occurring, then in Woodstock, the dubious reporters were invited to witness the “curious idea” in action. Near the town square, hundreds of onlookers attended as the body of Federick Ransom was exhumed, and his heart burned.

The first body exhumed was that of Rachel Burton in 1703 in Manchester, Vermont. The Congregational Deacon, the late husband of Rachel, was desperate to save his second wife from TB. The Deacon created the precedent… Oddly enough his wife still died two months after the ritual.

There are a total of 11 recorded exhumations – “recorded” being the keyword.

The most notorious is known as The Mercy Brown Vampire Incident.

Between 1880 and 1897 in Exeter, Rhode Island, several members of George Brown’s family suffered a sequence of TB infections. Mary Eliza, George’s wife, the matriarch was the first to die in 1886. She was immediately followed to the grave by their eldest daughter Mary Olive. In 1891, still overcome by grief, George lost two more of his kin; his 19-year-old daughter Mercy and his youngest son Edwin.

Friends and neighbors started feeding George wild horror tales and stories of vampires. The town was besieged by TB and everyone was certain that the culprit was a Nightwalker. The folklore, back then spouted out as fact, was that a hungry vampire was stalking the countryside.

George was persuaded, some say even forced, to give permission to exhume several of his family members. A quack pathologist and a less than objective newspaper reported were present when the bodies were disinterred on March 17, 1892. All the bodies, except one, exhibited the expected levels of decomposition. The corpse of Mercy showed no signs of rot and still had blood in her heart, the Yellow Rag went bananas. The gossip mill was churned up to eleven.

Instantly the town went into a frenzy… the vampire had been found! Mercy’s heart and liver were burned, and the ashes mixed with water to create a tonic. The tonic was sold as a “miracle cure” for TB.

Mercy’s lack of decomposition was later explained by an actual medical examiner. His conclusion was that the lack of rot was due to her body being stored in freezer-like conditions in an above-ground crypt during the two months following her death. While he was saying this, he looked at the quack doctor and thinking: “is he sampling from his private medical stock?”

Mercy Brown’s case inspired the character of Lucy Westenra from Bram Stoker’s Dracula. She became a stable in H.P. Lovecraft’s bibliography, the author constantly making references to her. Her story was the main subject of the first episode of Lore podcast as well as the television adaptation of the same title. Rappers, like B.Dolan, have written songs about her. Mercy is for all intents and authentic American mythological figure up there with Paul Bunyan.

For our next entry, we’re going to explore the Changelings and how an Irish belief caused one of the greatest legal controversies in American history. We’re also going to dissect further down the line Jack Parson and the Scarlet Woman, Mary Webster the witch of Hadley, Elizabeth Bathory the blood count, and Marie Laveau the Voodoo Queen of New Orleans.