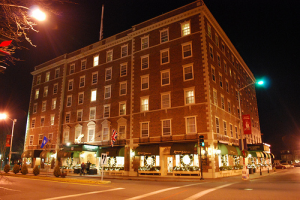 Named after author Nathaniel Hawthorne, Salem’s Chamber of Commerce and Rotary Club are responsible for this joint venture. Over one thousand residents and businessmen invested in the building under the plan to invigorate the town with a modern hotel.

Construction finished in 1925, selling over one million dollars of stock to locals. Further highlighting the hotel’s history, a drive took place to raise money for the purpose of commissioning a statue in the likeness of the hotel’s namesake, Nathaniel Hawthorne. It is located just a few yards away.

The site chosen for the Hawthorne Hotel is that of a piece of land once owned by the Salem Marine Society. Valuing their property, the group sold their land under the stipulation that they would be allowed to maintain their presence at the hotel once built. 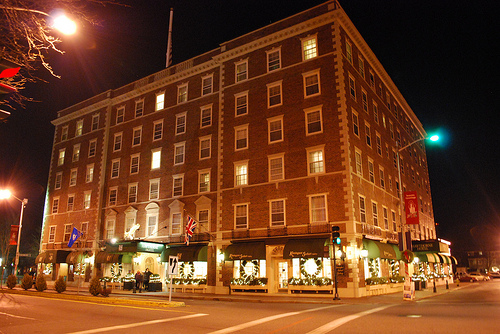 Keeping to the hotel’s end of the bargain, the rooftop of the Hawthorne features a replica of the cabin from an East India trading vessel known as the Taria Topan, where the Salem Marine Society still meets to this day.

Splendor of the Hawthorne Hotel

The Hawthorne Hotel officially opened for business with a three-day celebration that took place on July 21, 1925. Such is its well-renowned grandeur that many famous people have elected to stay here, including Johnny Cash, Liza Minnelli, Bette Davis, former president George Bush, Colin Powell, Walter Cronkite, and the cast from the 1970s sitcom “Bewitched”, which also featured the hotel in one of its episodes.

Famed actress Vanessa Redgrave even lived at the Hawthorne Hotel for an entire month while she filmed the television show called Three Sovereigns for Sarah.

When the Hawthorne opened, it had six floors, 150 rooms, and a main lobby that was two floors high, including a mezzanine and a balcony. In the 1950s, as more people came to own vehicles, the Hawthorne changed its name to the Hawthorne Motor Hotel.

In order to stay with styles of the changing times, The Hawthorne modernized its look. Possibly to its detriment, the hotel’s powers that be replaced the second-floor balcony with space for business meetings and covered the ballroom’s beautiful windows.

It was during this period that the Hawthorne once again underwent a name change – this time to the Hawthorne Inn. Finally, in 1989, it returned to the name Hawthorne Hotel and has remained so ever since.

With its ballroom ceiling reaching a height of 18 feet and 10 inches, many functions are held here, including weddings. Featuring fine dining and beautiful ballrooms, the Hawthorne Hotel is one of Salem’s finest institutions. Continual upkeep and renovations have earned it a place on the list of Historic Hotels of America by the National Trust for Historic Preservation.

The massive Hawthorne consists of 93 rooms and six suites, all beautifully decorated and furnished alongside fantastic architecture. Surrounding the hotel are buildings that were mostly designed by Salem sea captains. This group of individuals were known around old Salem for assisting elderly or handicapped people.

They comprised the Salem Marine Society that met and were stationed in a building where the Hawthorne now sits. As per their agreement with the hotel that is stated above, some believe the Society’s lost spirits now inhabit the hotel, still holding their meetings at the very location from long ago.

Bridget Bishop, the first woman executed during the trials for the practice of witchcraft, was said to have owned an apple orchard upon which this hotel was later built. Many guests maintain that they have encountered her very spirit within the hotel.

In front of the sixth floor’s room 612, the apparition of a woman is often seen standing still. From time to time she will wander up and down the hallway where room 612 is located. Within the room, guests have complained of the sensation that they are not alone; as if someone else is sharing the room with them.

And inside room 325 of the third floor, there have been several reports of hearing an unseen baby crying, lights turning off and on, and even water faucets inexplicably actuating. Others have reported numerous unidentifiable sounds. 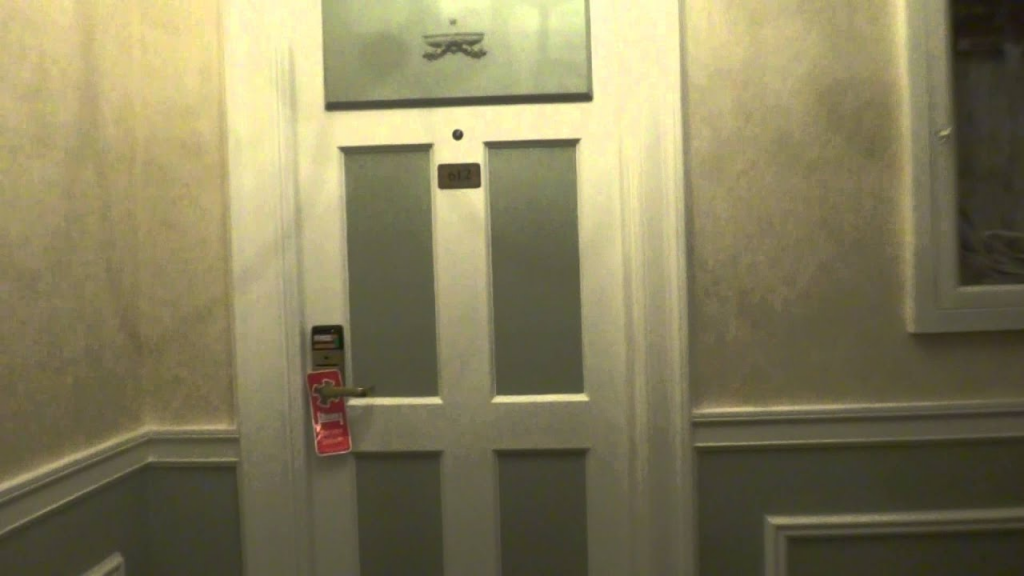 One particular employee refuses to work nights ever again. During his evening shift, after cleaning a room he went to get supplies and returned to find the room’s entire configuration changed around.

Also in the hotel’s restaurant, The Tavern, is a ship’s wheel on display. Used in the steering of a seafaring vessel, this display will often turn back and forth, as if being controlled by one of Salem sea captains mentioned earlier.

Furthermore, visitors have reported experiencing odd sensations near these rooms, as well as hearing actual ghostly voices. Some folks have detected the unexplained smell of apples, perhaps serving as verification that the Hawthorne was built over Bridget’s orchard.

So fabled is the Hawthorne’s haunted history that the SyFy Network’s television series Ghost Hunters visited the hotel in 2007 to film an investigation. And the hotel itself actually held a séance in 1990 to try and contact the spirit of legendary magician, Harry Houdini.

Guests have continually reported furniture moving all on its own, strange sounds and smells, and ghostly sightings. The Hawthorne Hotel is often ranked as one of the most haunted hotels in America, and for good reason.

The Hawthorne Hotel is a beautiful historical landmark renowned for its stunning architecture. Serving a multitude of guests both foreign and domestic, it has made a name for itself in not only its incredible design but also its alleged hauntings.

By providing a tourist attraction to locals and travelers alike, the Hawthorne has grown and changed over the years to accommodate its many fans. Garnering worldwide attention, it serves as a central hub for thrill-seekers and ghost-hunters.

With its rich history throughout the years, there is little doubt as to why the Hawthorne Hotel might be haunted. Not only did its construction effectively raze the base of the Salem sea captains, but it is built upon the once-used land of Bridget Bishop.

The Salem Witch Trials were a very trying time for the residents of Salem, with Bridget being the first of several accused, convicted, and executed for being associated with witchcraft. Ghostly entities are believed to inhabit areas and abodes with which they were once associated.

And with all of the horrific trials that Bridget Bishop and her fellow practitioners faced, it’s little wonder as to why the Hawthorne Hotel would be haunted by them. Couple that with the Salem sea captains of old who used to help out locals in need, and you’ve got the foundation for all of the creepy happenings of the Hawthorne. 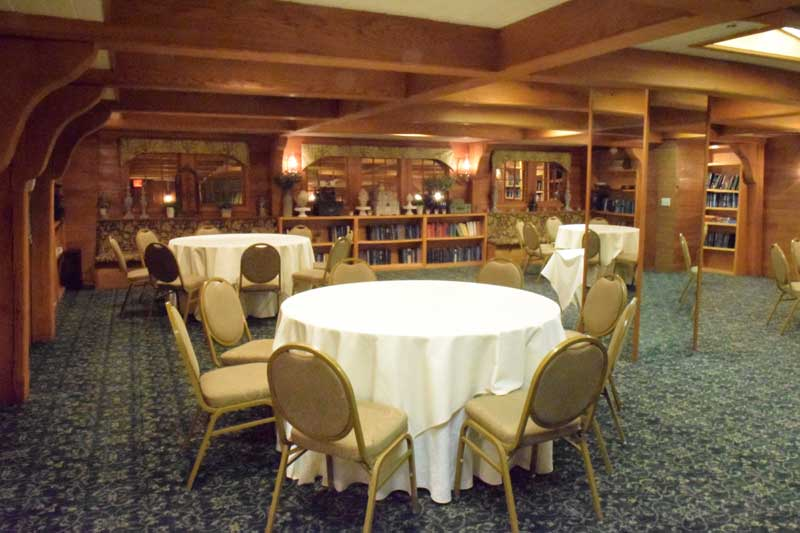 This would help to explain why not all of the paranormal events that take place in and around the hotel are malevolent. Like the ship’s wheel in the restaurant, it seems as though some spirits are simply reliving what they once loved, while others are just to let you know that they haven’t left and are still there.

The Hawthorne Hotel will most likely continue to adapt with the times, making changes to its décor and design. It may even see additions to its architecture over the coming years. These are a given with any enterprise, hotel, or otherwise.

One thing is certain, however, and that is the fact that the original foundation and structure aren’t going anywhere any time soon. The Hawthorne will always be the hotel that is built upon Bridget Bishop’s old apple orchard and the Salem sea captain’s former residence.

And as long as those truths remain, the Hawthorne Hotel will most likely remain haunted for generations to come. So if you happen to pay Salem a visit and stay at the famous hotel, don’t go running if a light happens to come on unexpectedly. It’s probably just a playful spirit having some fun. Now if your room’s furniture changes location overnight, then yeah, get the heck out of there.