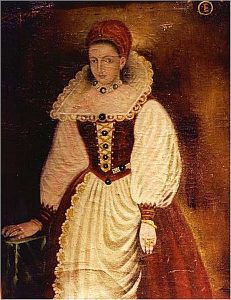 Countess Elizabeth Bathory, or Erzsébet Báthory, was an affluent and influential Hungarian aristocrat whose relationships constituted an uncle who was king of Poland and a nephew who was a potentate of Transylvania. She was also a sadistic, perverted, deviant devil whose actions in her region resulted in a systematic and intimate genocide of noblemen and common folks.

I wish I had been born a man, I would have killed thousands in battle, taken over countries, burned witches – I would have been a hero.

In 1610, she was arrested for grisly acts of serial killings and restricted to her home of Castle Čachtice, where she resided until her death. Bathory is reputed to have executed at least six hundred victims, winning her a Guinness World Record for the most productive female killer in history. Her endeavors ended in a very apt sobriquet by which her legend is remembered; “Blood Countess”. Elizabeth was most likely, aside from Vlad Tepes, one of the main inspirations for Bram Stroker’s Dracula. Stories of her misdeeds, her appetites, her evil, particularly in Wallachia, Transylvania, and Hungary have spawned numerous supernatural tales; in particular, the idea that Elizabeth was a vampire.

Bathory was spawned – as say spawned cause birth is to humane a word – in Nyírbátor, Hungary, on August 7, 1560.

At the tender age of 11, Bathory, who was considered an elegant, beautiful and well-educated miss, became betrothed to Count Ferenc Nadasdy. Accounts of her life differ and some of them include a litter of bastards children she fathered with another man, a peasant, before her marriage. But that marriage was really a tipping point for Bathory.

At 15, Elizabeth Bathory wedded Nadasdy on May 8, 1575. The couple’s first child was born 10 years later, in 1585. Bathory ultimately gave birth to five kids. Two died as infants, but two daughters and a son endured. Her husband was a renowned soldier and was often off fighting the Ottoman Turks and the Empire’s ventures into Balkan Europe. They were often apart. Meanwhile, just as Dracula/ Vlad Tepes, Nadasdy had been privy to some of the Turks’ more heinous practices, some of their legendary torture techniques. The man looked into the void, and the void looked back. His soul became corrupted by his enemy’s ways, and he started to adapt their methods and practices… he even improved upon them. Nadasdy became enamored of the bloodthirsty habits of Turks in the plain of battle… And he took this newfound fetish home to the impressionable Bathory. Nadasdy schooled Elizabeth in these acts and together they made a fearsome couple; one that gave in to their atavistic desires and reveled in the mix of sex, violence, and power. Bathory, no stranger to the biting chill of the night, and the call of violence reveled in her husband’s fascination.

In 1602, a priest addressed a letter to the ruling courts of Transylvania discussing the unwarranted brutality exhibited by Bathory and her husband towards their servants. The couple’s excessive bloodlust and complete disregard for human nature and rights were nearing monstrous proportions. The towns were starting to take notice. Blood was running through the streets and the trail, the delta of that sanguine Nile, fountained from the couple’s abode.

Nadasdy died in January 1604 and quickly and dispassionately Bathory took control of his extensive estates and continued her vile practices. By then, rumors were making the rounds and already the happenings in the castle were becoming folklore… the type you tell your kids to warn them to behave.

Bathory was finally formally indicted for a frightful litany of crimes in 1610. The town and village were small and too many folks were missing. She was arrested and put to trial, by her peers, for the murder of not only errant and stray females, but for those if her own court. Elizabeth Bathory severance package, for a servant and minor noblewoman, wasn’t exactly Amnesty International approved.

What came out, during the proceedings, terrified the populace and tossed a shroud of shame over the noble houses of Europe. Think Berlusconi… only instead of a sex-scandal much MUCH worse.

Bathory’s victims – more than 600 of them – were killed in all manner of depraved ways.

The details and sinful wickedness of her acts, not to mention the fact that it took authorities so many years to actually apprehend her transformed into a political scandal of untold proportions. A scandal that was later exasperated by the Turks’ media campaign against the noble houses of Europe. Elizabeth Bathory became the poster child, along with Vlad Tepes, of the evils festering within the Roman Catholic community… To say the Turks had a field day and were handed a PR magic bullet on a silver plate would be underselling the point.

But, one-act above all – one that to this day hasn’t been confirmed fully – is what cemented Bathory in the pantheon of historical devils… The reason why Stoker was so fascinated by her saga and why some traditions depict her as a strigoi; a Vampire. Elizabeth Bathory would bleed out her victims and shower in their blood. She preferred virgins, girls still in pre-adolescence. Bathory would take them, and clean them with milk, honey, and olive oil, and then she, along with her minions, would hang them by their ankles over a tub. Elizabeth would slice their necks and let the blood dribble out in a flowing cascade over her pale naked body. All, so she could recapture her lost youth.

On December 29, 1610, Count György Thurzó, who supervised judicial matters of Hungary, arrived at Castle Čachtice to examine the countess’ alleged violations against women of noble birth – mistreatment of servants was not a concern to the authorities. He caught Bathory red-handed – quite literally – in the middle of tormenting a young girl. The dame was arrested and imprisoned in her home while the committee rifled through her various crimes and made heads and tails of all that had transpired.

Bathory’s servants — three females and one male — were rapidly arrested, questioned, and tortured. The servants refused their culpability in the murders but confessed to concealing multiple victims. Two of the women and the male servant were condemned to death. One managed to escape imprisonment. Another gentlewoman, a black magic sorcerer that had aided Bathory in occult rituals during her killings, was ferreted out and killed on the spot.

Do I look like someone who cares about what God thinks?

Meanwhile, as a member of a regal family, Elizabeth Bathory wasn’t condemned to death let alone put on trial; regal families were above the law. The whole thing was a travesty. Instead, she was walled up – immured – in a tiny room inside Castle Čachtice, where she remained until she died in 1614.

She was originally buried in a tomb on her property, but her body was moved afterward… and to this day no one knows its whereabouts.

For more tales of the macabre check out our blog.