A church-of-all-trades, so to speak; this building has seen it all. From a church to a bank, then a jewelry store, and now a restaurant, Salem, Massachusetts’ First Church was built in 1634. Although it transformed and relocated over the years, the church remained in operation until 1923.

On April 11, 1692, Elizabeth and John Proctor were taken to the church’s meetinghouse to be questioned as to whether or not they practiced witchcraft. This, and an unfortunate series of events that followed, started when a young troublemaker by the name of Mercy Lewis began proclaiming that the specters of the Proctors were tormenting her.

By pinching her and tearing at her bowels from the inside, Mercy claimed that the Proctors were indeed practitioners of the dark arts and that they harassed her continually. It must be noted that John and Elizabeth Proctor led upstanding Christian lives.

They were highly regarded in the community; so much so that fellow friends quickly put together a petition in the Proctor’s favor, accumulating a large number of signatures from members of the town.

When these same friends began to question the validity of Mercy Lewis’ claims, she promptly recanted her accusations and said that she was only having a little bit of fun at the expense of the Proctors. You would think that the case was closed and everything ended well for all involved parties. If only.

Shortly thereafter, little Miss Lewis and her friends once again continued the finger-pointing. This eventually led to a doctor performing examinations on both John and Elizabeth to look for birth defects, moles, and other markings, as these were widely believed back in those days to be a sure sign that a person was a witch or warlock.

Even though the examination proved no such defects or markings existed, both of the Proctors were found guilty of witchcraft, and on August 5, 1692, both were sentenced to be executed. Shortly thereafter on the 19th of August, John was executed. However, due to Elizabeth being pregnant, she received a stay of execution until the birth of her child.

Fortunately, during this time period, the hysteria of witchcraft had died down, and Elizabeth was exonerated and freed from her captivity. It is rather interesting as to what led up to the ending of the rampant accusations of witchcraft.

The same girls who first accused the Proctors started to accuse Lady Mary Phips, who was the wife of the Governor of Massachusetts, William Phips. It was at his point that the governor immediately released all 153 prisoners who were currently awaiting trial for the alleged practice of witchcraft. Elizabeth Proctor was one of those prisoners.

It’s certainly plausible when considering the dark connections that this building has to the Salem Witch Trials. And if that wasn’t reason enough, there is another haunting tale that serves to cement this belief.

When the sea captain learned of this, he felt so betrayed that he decided if he couldn’t have the young lady, no one would. Burning with jealousy and rage, the captain led Sarah to the alleyway alongside the First Church where he proceeded to murder her by bludgeoning her in the head with a board.

After a short spell of remorse, the captain allegedly petitioned the services of the First Church’s minister. But this wasn’t so that he could repent of his sins and beg forgiveness. No, the wicked old captain asked the minister to help him dispose of Sarah’s body by burying her in the underground tunnels that ran below the church.

It should be noted that these tunnels still exist today, although they are used as storage for the restaurant and other nearby establishments.

While the ghost of Sarah seems to be rather harmless, the Man in Black is said to be a very malevolent being. Many reports claim that his spirit does not like women and that he often lashes out at them. He is mostly seen wandering the upper levels of the eatery. 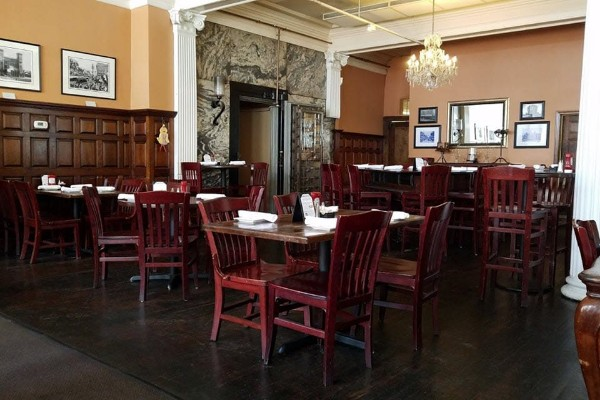 While patrons of Rockafellas have had their fair share of otherworldly encounters, employees seem to have the most stories, as they are the ones who have to be in the presence of such ghosts the most often.

Many claim that the underground storage tunnels inhabit the sounds of footsteps, ghostly moaning, and frightening sources of energy that can be felt upon entering the basement. Some employees refuse to go down to the lower levels for these reasons.

There are some who argue that the Man in Black is actually the ghost of a gentleman who was from the time period when the church’s lower level operated as a jewelry store – the Daniel Low & Co. jewelry shop that operated from 1874 to 1995.

They became famous when they began advertising and selling a souvenir witch spoon. Considered the first official souvenir of witchcraft delusion, the witch spoon featured the image of a witch, three witch pins, and the word “Salem”.

Witch pins are said to have been used by witches to stab those that they disliked. One such instance of these types of pins being used in Salem was in court during the trials. As a witness was about to testify against the witches, one such accused witch thrust a pin through the lips of the witness – in full view of all attending the trial!

By the late 1890s, Salem was a popular tourist site for those interested in the Salem Witch Trials from nearly 200 years earlier. And these spoons served to be an incredibly profitable and popular attraction.

So popular, in fact, that the Daniel Low Co. released a second iteration in 1891. Since it was nearing the Bicentennial of the infamous Witch Trials, Seth Low (Daniel Low’s son) surmised that a new version commemorating the events would sell like hotcakes.

And they did. This new collectible featured a witch and broom, a cat, rope, witch pins, and the place and date of the Salem Witch Trials. Whether the Man in Black is the lost spirit of Daniel Low is up for debate, but with his jewelry store profiting off of one of the darkest times in Salem, it certainly makes sense.

Salem, Massachusetts is well-known for its haunted history that far extends beyond just the Salem Witch Trials. But perhaps the events of the trials cast a dark pall over all of Salem, resulting in the horror that we hear of today.

It’s interesting to see that the draw to the paranormal has continued all these years later, with no signs of letting up. Tours are available to the public to get a first-hand look at locations throughout Salem, with stores and other establishments offering a glimpse into the history of the Witch Trials.

Rockafellas Restaurant garners just as much attention from ghost-hunters and the curious. Although they don’t go out of their way to advertise the paranormal happenings that occur within, perhaps that is what makes them so believable. Just ask any employee and you’ll be convinced that this place is just as haunted as any in Salem.