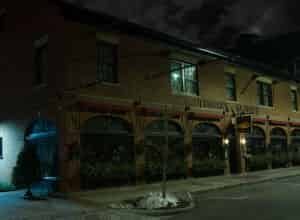 One of Salem’s most popular dining establishments, Turner’s Seafood, is a New England seafood restaurant and local institution. While the cuisine and ambiance on offer at Turner’s are renowned, the restaurant’s enduring appeal isn’t only due to its fare or decor. The modern Turner’s property is better known as Lyceum Hall, a historic landmark.

In its day, Lyceum Hall was predominantly a center for lectures and presentations. It hosted a number of famous cultural, political, and academic figures. Furthering the mystique and legendary status of what is now Turner’s Seafood, even before the Lyceum Hall was on the property, the land once housed an apple orchard.

Bridget Bishop, one of the most notable figures in the Salem Witch Trials of 1692, owned the orchard. Bishop, of course, isn’t noted in history for simply being an apple orchard owner. Her notoriety stems from her demise—she was the first woman executed for the charge of witchcraft in the 1692 witch trials.

Incidentally enough, since Bishop’s death, a spectral woman has appeared throughout the former Lyceum Hall building.

The Orchard and Bridget Bishop

The most common accounts of Bridget Bishop paint a portrait of a vibrant woman who, in her life, was perhaps misunderstood. According to the centuries-long rumors associated with Bishop, the woman was supposedly a promiscuous, amoral, flamboyant barfly who was married three times: all traits looked down upon in Puritanical Salem Village, especially for women. Per this logic, her (comparatively) flashy figure made her an easy target for the witchcraft accusations that would later end her life.

However, there are conflicting versions of Bishop as a real, historical person, rather than an exaggerated, outsized legend. The colorful characterization of Bridget Bishop as a woman who dressed loudly and owned a tavern is most likely a historical inaccuracy that, over time, has been passed along as fact. In later (written and oral) retellings of witch trials-era Salem, Bishop was repeatedly confused with Sarah Bishop, another woman accused of witchcraft, and the wife of one of Bishop’s stepchildren.

The real Bridget Bishop was no less interesting or prone to controversy and attention, though. And she was, in fact, married three times, but for unfortunate reasons.

Bridget Bishop was born Bridget Playfer between 1632 and 1635 in England. While still in England, in 1660, she married Samuel Wasselby, her first husband. Shortly after getting married, the couple moved to the Massachusetts Bay Colony.

The pair fought often. Their fights were severe enough to land them in court on at least one occasion. Per a neighbor’s testimony, as collected in the book Salem Village Witchcraft: A Documentary Record of Local Conflict in Colonial New England:

“Mary Ropes, aged about fifty years, deposed that she had several times been called to her neighbor Thomas Oliver’s, by himself, but mostly by his wife, to hear their complaints one of the other, and they both acknowledged that they had been fighting together. Further she saw Goodwife Oliver’s face at one time bloody and at other times black and blue, and the said Oliver complained that his wife had given him several blows.”

As a result, Bishop and Oliver were fined. In 1678, Bishop was brought to court again for using “foul language” toward her then-husband. Unbelievably, she was then ordered to stand with her husband in the public market.

For an hour, they stood, gags in their mouths, with paper labels explaining their offense attached to both of their foreheads. These repeated offenses and highly visible punishments obviously didn’t help Bishop’s image in the village.

In 1679, Oliver died, and Bishop inherited his estate. She received the house, ten acres of land, two pigs, and the household’s contents. Both Bishop’s stepsons and daughter only received twenty shillings each. One doesn’t have to be a colonial currency expert to infer that such an amount is very low.

As such, shortly after receiving the inheritance, she was suspected of bewitching Oliver to death. This initial accusation didn’t go to trial, chiefly due to a lack of supporting evidence—an ironic outcome, given how the witch trials would later operate.

Later, in 1687, Bishop was accused of and arrested for stealing brass from a local mill. There are no records that dictate what happened in that trial, but suffice it to say, Bishop’s reputation only worsened with time.

She married a third time, to a well-regarded woodcutter named Edward Bishop, earning the married name that she’d be soon immortalized under.

Bridget Bishop and The Witch Trials

Around the Salem Witch Trials, the Bishops lived in what is now downtown Salem. There, at 43 Church Street, Bridget Bishop owned an apple orchard. Unknown to her at the time, this orchard would later play a significant part in her afterlife.

During the witch trials, Bridget Bishop was the most accused victim of all. A number of outlandish stories about her circulated: she conjured up demonic, black-colored pigs and a flying monkey to torture a neighbor; she bewitched humans and animals alike; she even killed a few people.

Perhaps due to her perceived character and criminal history, an abundance of witnesses poured out to testify against her. Worsening her situation, Bishop’s own testimony was shaky and inconsistent.

Despite her professions of innocence, no one believed her. Ultimately, she was sentenced to death by hanging for “bewitching” five young girls (whose names recur in virtually all reports of the 1692 witch trials): Abigail Williams, Mercy Lewis, Mary Walcott, Elizabeth Hubbard, and Ann Putnam, Jr.

Her death set off a subsequent wave of witch trials and executions that led to the deaths of thirteen more women and six men.

The second life of 43 Church Street was the Lyceum Hall. As Lyceum Hall, 43 Church Street was a Victorian-era magnet for intellectual heavyweights. Luminaries such as Henry David Thoreau, Frederick Douglass, Ralph Waldo Emerson, and Alexander Graham Bell all appeared at the Lyceum. Most remarkably, on February 12, 1877, the Lyceum was where Graham Bell conducted the first-ever demonstration of the telephone.

The Lyceum’s sturdy brick building dates back to 1831, when the Salem Lyceum Society purchased the land.

Following the trends of 1800s America, Lyceum Hall was intended to be a space for education and cerebral entertainment. The Lyceum offered literary readings, discussions, and lectures to both the society’s members and the general public. Popular subjects of the lectures were politics and government, arts, science, literature, and philosophy.

For six decades, the Lyceum hosted over 1,000 lectures. Ralph Waldo Emerson alone contributed almost 30 of those lectures. The hall was as beneficial to speakers as it was to audiences, as speakers could use the reaction and size of the lecture audiences to gauge the potential success of an essay, book, or other project before even trying to release it.

Curiously enough, there are no known stories from this era of visitors observing any paranormal activity at the hall. Why this is the case is, appropriately enough, up for discussion.

The Ghost of Bridget Bishop

The third and latest life of 43 Church Street belongs to the world of dining. After the Lyceum’s time ended, the building underwent renovations. This remodeling has allowed for the space to act as a restaurant or bar. Since 1989, the former Lyceum Hall has served as a place for dishes and drinks. This long-standing tradition continues to the present day, with the building’s current occupant, Turner’s Seafood.

Oddly, since becoming a restaurant, Bridget Bishop has seemingly made it a point to return to her former orchard. Ever since 1989, several visitors have reported witnessing a woman in a long, white gown drifting throughout the building. The woman has been seen eerily floating above the Lyceum’s main staircase. She’s appeared in brief glimpses in the reflections of the building’s windows and mirrors.

As another reminder of Bishop’s legacy, the fresh, crisp aroma of apples can sometimes still be noticed in the building, despite the building not having been an orchard for centuries.

Though Turner’s sometimes has a few apple-centric items on their seasonally-rotating menu, the scent of apples weighs in the air regardless of the menu’s contents.

Although the building is haunted, Turner’s Seafood is still an operational restaurant open daily.

If you’d like to experience this historic site for yourself, or learn even more about the history and haunting of the building, consider joining our nightly Salem Ghost Tour. Turner’s Seafood at Lyceum Hall is just one of the many haunted sites on our thorough, interactive tour.