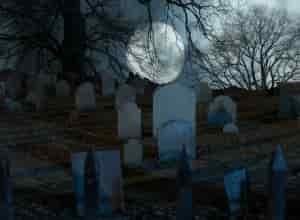 The Salem Witch Trials are typically associated with women and girls. Although outdated views of “hysteria” were undoubtedly responsible for the tragic deaths of so many female victims, accusations of witchcraft also affected men. One of the most notable examples of an accused (and executed) man during the witch trials is Giles Corey.

The Man, The Farmer

Giles Corey was a rich, elderly farmer originally from England.
At the time, Salem law dictated that those found guilty of crimes must have their property seized by the sheriff. The sheriff would then divide the property among the village. Given this legal and cultural structure, the wealthy Corey was placed in the town’s crosshairs as one to always conveniently suspect.

In April 1692, five girls, better known as some of the “afflicted girls” of Salem, accused Corey of witchcraft: Elizabeth Hubbard, Ann Putnam, Jr., Abigail Williams, Mary Walcott, and Mercy Lewis. During his initial legal examination, the girls accused him of torturing them, and their emotional cries and groans of pain further convinced the judges that Corey was guilty.

Corey asserted that he was not guilty, but rejected a trial. He believed the court was biased against him, so he had no real chance of being declared innocent. Instead of proceeding with a trial and attempting to defend himself, he never went.

He was sentenced to death.

The Execution of Giles Corey

On September 19, 1692, Giles Corey was crushed to death in Salem Village, shortly after being excommunicated from the church. His execution was an agonizing process.
First, he was stripped nude and forced to lie facedown on the ground. On top of his back, a wooden board was placed. Increasingly heavy rocks were then placed, one by one, on the board, as the pressure from the grueling weight gradually crushed his bones and organs.

All of the villagers watched his execution as a spectacle. As the rocks were stacked on him, and the sheriff demanded he plead guilty, Corey simply responded: “more weight.” He pleaded for more weight, as, in addition to his resolute belief in his innocence, he strove to die faster.

It took days for him to finally succumb to his death.

For his gruesome, terrible death, Corey was not without his problems in life. In 1675, he beat a farmworker, Jacob Goodale, to death for stealing apples from the cellar of Corey’s brother. He lied about the worker’s death, purporting that Goodale fell off a horse.

Despite his lies, Corey was found guilty of murder but was only forced to pay a fine. Ironically, he benefited from his wealthy status throughout the village, as his light punishment reflected the village’s perception of Corey as a productive member of society.

Unfortunately, the murder of Jacob Goodale did leave a significant scar on Corey’s reputation in Salem. Corey’s subsequent actions didn’t help his status, either. He’d been convicted of theft twice and was also suspected of arson.

Marrying his third wife, Martha, helped keep Corey on the straight-and-narrow, and improved his standing in Salem. He joined the church in 1691 and was thought to have changed his aggressive ways as a result. As the Salem church record detailed:

“Giles Corey, a man of 80 years of age having been a scandalous person in his former time, and God having in his later time awakened him unto repentance he stood propounded a month, making a confession of such evils as had been observed in him before. He was received into the Church with consent of the brethren.”

In short, Corey had redeemed himself in the eyes of the village with this one change… or so it had seemed at the time.

Corey’s wife, Martha, was a woman of faith. Martha was considered a positive influence on her husband, as he’d not committed any crimes since the start of their marriage. She dutifully attended church to the point of not noticing the storm of rumors and fear devouring Salem.

In spite of her peaceful nature, she was accused of witchcraft. Martha denied the accusations, but her unaffected tone was misinterpreted as guilt by the judges.

Worsening the situation, she was accused of torturing her associates. In court, her associates, Ann Putnam Jr. and Sr. pretended like Martha was actively torturing them and controlling their bodies. The jury believed their acting, and she was found guilty of witchcraft. She was hanged mere days after Corey’s own execution.

At first, in court, Giles testified against his wife. He then tried to retract his statements, realizing that he’d mistakenly bought into the lies waged against her. It wasn’t long after the trial that he was accused of witchcraft himself.

The Man, The Warlock

Initially, Corey was deemed suspicious for trying to recant his testimony for his wife’s sake, in a kind of assumed guilt by association. His reputation suffered further, as he was also associated with the faction of the church that disagreed with the Putnams, who were responsible for several accusations during the witch trials.

In a climate so sharply focused on conformity, Corey didn’t fit into Salem’s witch panic as much as he should have. Rather, he skeptically rejected the culture of accusations, putting his innocence even more into question to the townspeople. This rejection likely took hold after he fell prey to panic in testifying against his own wife, and certainly when he himself stood accused.

With time, the accusations levied against Corey progressively shifted into accusations of witchcraft. The allegations piled up: he was seen at a witches’ sacrament; he tortured girls; he killed before, and will only do it again. He was decried as a warlock; his character was assassinated before he was.

The Aftermath of Corey’s Death

Giles Corey’s death sent a shockwave through Salem, as he didn’t fit the stereotypical profile of a witch. He was elderly, male, and devout. He had an inspirational redemption arc, from murderer to man of God, and had maintained a life free of crime for some time. Most importantly, he had an unusual, gratuitously horrific death.

Corey’s death was not in vain. His brutal martyrdom is credited with causing the public to disagree with the witch trials, helping initiate the end of the trials. He was also immortalized in writing, most famously in Arthur C. Miller’s play The Crucible, for his courage in the face of persecution, and he became a cultural symbol of holding firm in one’s convictions above all else. His name was cleared of the witchcraft accusations in 1711 by the Massachusetts legislature, far too late for Corey’s sake.

Corey was buried in an unmarked grave in what is now the Howard Street Cemetery, near the site of his execution. Since his death, there have been rumors that his ghost haunts the cemetery, seeking retribution for his killing. His ghostly legacy also extends beyond the confines of the cemetery. It is said that, while he was being executed, he placed a curse on Salem, perhaps revealing that, in the end, he did have at least a degree of supernatural abilities. He targeted the sheriff in particular, shouting “Damn you! I curse you and Salem!” at the man.

Sheriff Corwin died of a sudden heart attack at 30, just a few years after Corey’s execution.

The curse is thought to have lived on, affecting every Salem sheriff from 1692 onward.
As recently as 1978, Salem Sheriff Robert E. Cahill had to retire due to a litany of health issues: stroke, a blood disease, and a heart attack. His doctors couldn’t detect their causes.

The sheriff before Cahill also developed a blood disease that forced him to retire. That sheriff had inherited his position from his father, who died of a heart attack while being sheriff himself. The sheriff before him yet had also struggled with heart conditions. As far back as traceable, the sheriffs of Salem have also had similar health issues.

Corey’s curse lingered for three centuries until 1991, when the sheriff’s office moved out of Salem, breaking the curse. Since 1991, no sheriffs have had heart or blood problems diagnosed.

The Man, The Ghost

At the Howard Street Cemetery, the ghost of Giles Corey haunts the vicinity and is most commonly encountered before and after a town tragedy, such as the Great Salem Fire of 1914.

In 1914, right before the fire, a ghostly figure of an old man was seen hovering through the cemetery grounds. The fire started near Gallows Hill, the site of his wife Martha’s hanging. It destroyed most of Salem.
It remains unclear when his ghost will next be seen. What is clear: this is not a friendly ghost.

Though his actual grave is unmarked, a memorial marker for Corey can be found at the Salem Witch Trials Memorial, one of the stops on our unique Salem Ghosts tour. If, after reading this, you’d like to pay your respects to the man for his character in life, or, if nothing else, avoid being on his ghost’s bad side, consider joining us on our journey through historic Salem.

We will try our best to not run into this scorned ghost on our travels but can make no promises.