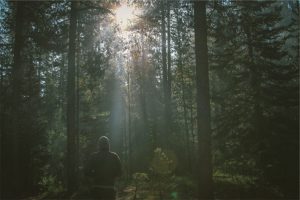 Massachusetts and its historic towns have consistently topped ‘most haunted’ lists all across the internet. But what about the outdoor hauntings that occur in some of Massachusetts’ most beautiful natural landscapes? Check out four of the most Haunted Massachusetts hikes below for your next spring trip!

Myles Standish was a soldier who was hired by the Separatists, later known as the Pilgrims. He came to Plymouth Rock aboard the Mayflower in 1620. As the designer of the first fort in Plymouth, he was well respected within the community and started to trade with the various Native American tribes that occupied the area. He kept a good defense around Plymouth and enforced the laws throughout the first colony. Standish often went on trips back to England to trade and bring goods back to Plymouth. In the mid-1630s, he founded Duxbury, a smaller town just outside of the Plymouth limits. Standish was known for his preemptive defense tactics and lived out his life in Duxbury, or Duxborough, until October of 1656, when he died.

The Myles Standish State Forest is named after him for his contributions and protection of Plymouth in its infancy. The forest holds a more sinister tone, however.

In early 1977, a woman was biking in the forest and was attacked and murdered by an unknown assailant. The case remained unsolved until 2003 when the man accused of murdering the woman was finally captured and tried in court. Up until 2003, activity in the forest was intense. Visitors reported patches of the forest to contain heavy fog while others did not, and disembodied voices and screams echoed throughout the trees. People have concluded that the victim’s spirit was attempting to make contact and could not rest until her murderer was brought to justice.

Harold Parker State Park is home to over 35 miles of shady trails and roads. Ponds and rocky outcroppings provide a spooky backdrop to the already strange nature of the park. Evidence of its former life as 18th-century farmland and homestead can be found in the form of crumbling buildings and unmarked graves dotted throughout the property. Before English settlers moved into the area, the forest was inhabited by Pentacook Native American people.

Paranormal reports are plenty out of this state park! Visitors claim to see a ghastly, weeping woman wading out into the waters of a small pond in the park, gradually getting deeper and deeper into the water, moving slowly from the shallows to the dark depths until she is completely submerged, her crying ceasing. While this lady-of-the-pond provides the forest with a genuinely chilling tale, one of the strangest is that of the disappearing bridges.

Visitors to the park report encountering makeshift bridges made of birch branches and twigs that span small creeks. According to reports, once they cross one of these bridges and move away from the area, the bridge completely disappears, unable to be relocated. It’s been tested with path markers, retracing of footsteps, it doesn’t seem to make a difference – the bridge, and even in some cases, the stream will completely vanish. The phenomenon has been reported most frequently in the area nearby Berry Pond.

The park is home to eighty-four campsites across its beautifully vast 3,000 acres of forest. And while you have to be exceptionally brave to camp out here, Harold Parker State Forest doesn’t disappoint when it comes to nature’s solitude as well as spirits!

Hike Difficulty: Easy, the grounds were meant to be traveled, but quarry edges are dangerous.

The Beckett Land Trust Historic Quarry and Forest is a nature preserve that is filled to the brim with the ruins of a 200-year-old mining operation. Once known as the Chester Hudson Quarry, the quarry played a vital role in the early development of the entire area. Operational from 1860-1947, the quarry was famous for its production of blue granite and shipped loads of the rock, which would later be made into tombstones. Production ceased one day, and the quarry was left in a state of disarray; all of the equipment was left where it sat, and the spirits of miners lost here were left behind as well.

The quarry has a long history of accidents ranging from mining incidents to accidental falls off the quarry’s edge. Over the years, a reported 13 people have perished at the quarry. These days, hikers say sounds of mining and vibrations can be felt underfoot. Disembodied voices and men yelling are also reported.

If a visit to the quarry is in your future, caution is advised as the quarry’s edges can be extremely perilous.

Named the ‘Most Haunted Forest in America,’ the Freetown-Fall River State Forest is one of the most mysterious spots filled with fear, murder, and of course, the paranormal!

Behind the gorgeous forested backdrops and sun-drenched clearings, the Freetown-Fall River State Forest hides an exceptionally dark reputation. A part of the fabled ‘Bridgewater Triangle,’ the forest acts as a magnet for the horrifying. It is known as the cursed forest of Massachusetts, and once you read of the area’s history, it’s no surprise why.

Based on truth and not just speculation and rumors, the Freetown Forest is the site of more than a handful of documented crimes and tragedies. The forest’s dark history started in 1978 when the corpse of a girl named Mary Lou Arruda was discovered tied to a tree in the woods. She was a local 15-year-old who had been abducted recently from the town of Raynham about two months prior to her discovery. James M. Kater was eventually tried four times for her kidnapping and murder and was convicted.

Another murder occurred near the forest in 1980, and as police were conducting their investigations, they were approached by numerous locals who claimed to have witnessed Satanic cult activity in the woods. Some believed that these reports connected to the ‘Fall River Cult Killings’ that occurred during the early 80s. Suspicious and seemingly unnatural forest clearings stained with animal blood were discovered deep within the woods here. Strangely and purposefully arranged cattle carcasses were later found as well, perhaps ritual sacrifice?

But the tragedies don’t stop there, unfortunately. Three more murders also occurred within the state park’s limits. In 1987, a homeless man was mistaken for an undercover police officer and was murdered in cold blood. In 2001, two men were found riddled with bullets on Bell Rock Road, which winds through the entirety of the woods. There have also been numerous assaults reported along the forest’s shady paths.

Other incidents that have come out of the Freetown Fall State Forest give it the final push as the most haunted forest in the United States, including bands of aggressive dogs roaming the park and even an escaped emu attacking visitors. As of May 2016, strange wires were found stretched across frequently traveled paths and were found to have a very sinister purpose: to catch off-road motorbike riders across the neck and severely injure or decapitate them.

The forest holds a supernatural reputation as well, which includes everything from UFOs, blood sacrifices, mysterious floating orbs of light, strange disappearances, to abductions. Former President Ronald Reagan even reported seeing orbs flitting throughout the forest with no known cause. Many locals believe that the forest exerts a powerful dark force that influences people to commit suicide. While all of this may be a lot to take in, a visit to the forest (during the day, at least) is a beautiful one. However, skeptics beware; you may want to make sure you’re well out of the park’s boundaries before night falls.

Will you take any of these haunted hikes? If you do, maybe once the day is done you’d like to rest up at one of Massachusett’s most haunted inns!